5 Netflix shows you need to make time for this September 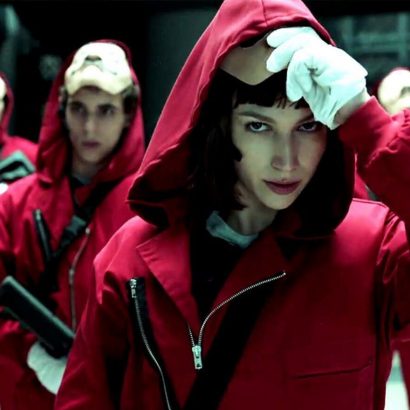 This September is going to be jam-packed with thrilling entertainment. We're looking forward to welcoming back some of our favourite Netflix shows on our screens - some being the last time. Plus, we're always open to new shows and don't mind sifting through them to find some gems.

Here are the shows we're anticipating this month:

The first instalment of the final season of Money Heist is almost upon us. While part four left us shattered with Nairobi’s death and with a great cliffhanger, we’re all so eager to find out if and how The Professor will navigate the squad out of the Bank of Spain.

The gang has been shut in the Bank of Spain for over 100 hours. They have managed to rescue Lisbon, but their darkest moment is upon them after losing one of their own. The Professor has been captured by Sierra and, for the first time, doesn’t have an escape plan. Just when it seems like nothing else could go wrong, an enemy comes on the scene that is much more powerful than any they’ve faced: the army. The end of the greatest heist in history is approaching, and what began as a robbery will turn into a war. Part 5 of the iconic series will be released in two volumes, on September 3 and December 3 2021.

Season three already? Yaas. A new group is coming in, and that means new twists and turns too! The Circle has got to be one of the most entertaining and addictive shows on Netflix. If you haven’t seen it, do yourself a favour and check out seasons one and two.

Season three will premiere on Wednesday, 8 September, with new episodes every Wednesday. It is best to binge all episodes when they are available.

Netflix also announced that the series is picked up for seasons four and five.

Lucifer is also making a return with its sixth and final season. Ten episodes have also been confirmed along with the episode titles.

We’ll get to find out how Lucifer will adapt to his new role as ruler of the world and everything that comes with it.

This is it, the final season of Lucifer. For real this time. The devil himself has become God… almost. Why is he hesitating? And as the world starts to unravel without a God, what will he do in response? Join us as we say a bittersweet goodbye to Lucifer, Chloe, Amenadiel, Maze, Linda, Ella and Dan. Bring tissues

Blood & Water, a local show that scooped several accolades for season one, is returning for season two.

The show has been so successful, making it the first South African Netflix original to rank number one in the US and setting Twitter abuzz with each episode.

In season two, we'll see what lies ahead for Fikile and Puleng. What drama will unfold? And what is the new character's (Sam) deal?

If you haven't seen this one, you still have time to catch up!

Parkhurst High returns with a rocky start between Puleng and Fikile following the revelation of the DNA results. The drama ensures to test old alliances and forging new and unlikely friendships. A new school therapist joins the staff, and a new hunk, Sam, joins the Parkhurst gang, with both bringing a few secrets of their own… One thing that we can all be sure of is nothing is ever as it seems and nobody will be left unscathed by the truth.

Judging from that alone and the looks of the trailer, this one seems to be as promising and dishes out all the creepy vibes if you're into horror.

MIDNIGHT MASS tells the tale of a small, isolated island community whose existing divisions are amplified by the return of a disgraced young man (Zach Gilford) and the arrival of a charismatic priest (Hamish Linklater). When Father Paul’s appearance on Crockett Island coincides with unexplained and seemingly miraculous events, a renewed religious fervor takes hold of the community - but do these miracles come at a price

Which shows will you be watching? Let us know in the comments below or on our social media pages.