How does your internet connection affect your gaming experience? 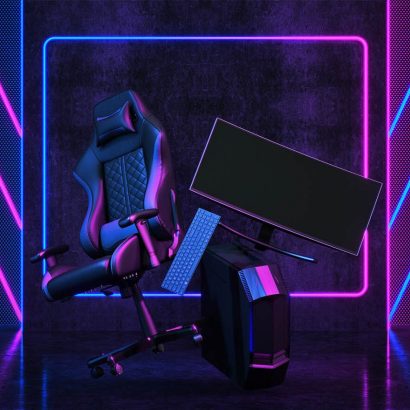 What is a good internet connection for online gaming? Of course, this is a multi-faceted answer. But the short answer is that for online gaming, we would recommend an Uncapped Fibre package with a speed of up to 10Mbps+.

The key to gaming online isn’t speed, but the consistency of your latency. Let’s elaborate.

How do online multiplayer games and servers work?

Online multiplayer games operate on a client-server model typically, while some games utilise P2P (Peer To Peer) networking. P2P online games are normally hosted on one player’s computer, and other players join the game from their machines.

In the client-server model, there’s one version of the game world online, or across multiple servers (for different regions). The number of servers and game worlds is dependent on the type of game.

For example, if a game is an MMORPG (Massive Multiplayer Online Roleplaying Game), there is a huge global user base. This means more servers are required to maintain a good user experience for all players.

Throughout a session, regular streams of data packets are sent to the server housing the game world. Each data packet contains an update of the player’s inputs from the client-side. Input actions can vary from different mouse positions to a combination of keys pressed.

The player input data is deciphered by a simulation code on the server-side, which turns player inputs into tangible motion and action in the game world. The result is that this simulation is run both on the client and server-side.

Following this process, the server will then send out data packets specifying all clients (players) positions throughout a game world/server, which results in the in-game action users see on their screens.

The issue of latency: good and bad

One of the biggest issues fans of online multiplayer games can run into is latency when playing on internationally hosted servers. Latency is the amount of time it takes for data to travel from one point to the next point. It’s measured in milliseconds or ms.

The consistency of your latency is affected by a few factors including:

Good latency for gaming is very dependent on the type of game you’re playing, as well as the location of servers. Generally, when playing online, a latency of 100ms or below is great. For games like first person shooters, you require an even lower latency of less than 50ms, or even below 30ms. This is because these games are more action intensive than MMORPGs by comparison.

Think about games like World of Warcraft. Gamers in South Africa usually play on EU servers for the best possible experience. As a result, the latency of your internet connection becomes a huge factor in your experience. As latency affects the length of time you wait to send and receive data from the server.

Most SA gamers pray to have a latency below 200ms when playing common titles, especially on EU servers. Latency is therefore very subjective and depends on the type of game.

What is best practice for gaming online?

If you are a gamer when choosing an internet package you should go for something that offers the lowest latency possible. Fibre optic based internet allows you to transfer data to and from gaming servers with relatively low latency, compared to other internet solutions like LTE-A and mobile connections.

LTE-A based solutions like Fixed Wireless, do not offer the same level of reliability as fixed line solutions. These solutions are prone to being affected by issues such as weather, network coverage and more. Fibre is primed for a good gaming experience.

Furthermore, to make your online gaming experience even better, be certain that you’re gaming on a wired connection (via an ethernet cable) where possible, as there can sometimes be issues with the speed of WiFi. You’ll also need a router well-suited to gaming needs with extra LAN ports, higher speed WiFi capabilities, better functionality for balancing network loads and security options.

In the online gaming world, you want to have the best possible set-up so that you can have a good gaming experience. For more information about fibre broadband internet, visit the Afrihost fibre page.